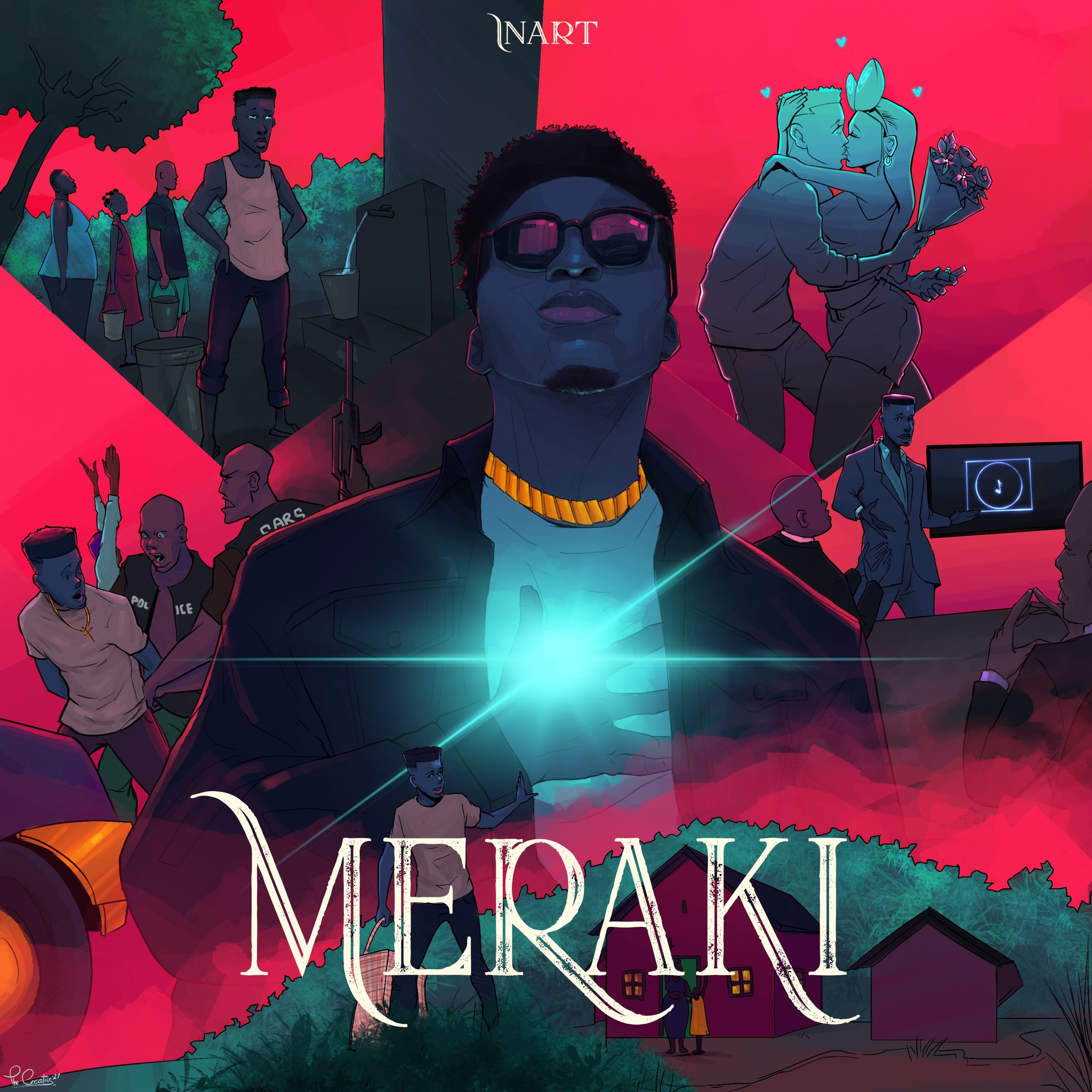 “Meraki”, Is an EP by 23years old alternative HipHop artist Inart. His sophomore tape is one that has been teased and highly anticipated by his following. This tape was produced entirely by Daniel Bliss. His debut EP, “Pink Blue”, dropped on the 31st of December 2020 that opened up with a track titled “Intro To Meraki” and this pretty much summed up a tease that built up to his sophomore project “Meraki”. He Dropped an exciting new single “Falling” from the EP in March to draw insights into his anticipated tape “Meraki”

Before pushing play on this project; one thing that draws your attention is the cover art which completely depicts the story and theme of the project. The images depicted show him being dragged off by police, waving goodbye as he leaves home, kissing his lover, standing alone amidst other people and showing him victorious with a suit and tie. After listening to this tape every detail aligns perfectly with the theme. As a listener you might not get the cover art at first glance but after listening; it all makes sense.

When artists say they aren’t genre bound, Inart is the true definition of the term; as his EP dissects through different genres and comes across as HipHop, R&B, AfroBeats and Afro-house; but the best definition and closest genre to decipher from this tape is Alternative rap. The beats and production quality are so seamless that it’s refreshing to listen to and that’s all thanks to Daniel Bliss that produced the entirety of the project.

Inart described this tape as a journey through his life experiences and it is solidified in each song on the tape. Inart deserves all the roses for his story telling skills as his lyric paints a vivid picture for those that care to listen.

“Long Way From Home” explains him leaving his family behind to chase success in the big city. On “Big Black Sienna”, he talks about the scourge of law enforcement agents that continually plague youths in the country. “Feel My Pain” and “Falling” has him pouring out raw emotions of personal struggles and romantic attraction; while he sounds self-accomplished and in control on “Independent”. Inart brings 5 different stories to life in a way only a true lyricist can.

In Summary, “Meraki” is a solid tape for a sophomore tape and the replay value is truly enticing. The lyricism showcased in this tape is peak excellence over the beats and showed control. Inart really outdid himself on this tape and we can’t wait to see what he has in-stall moving forward.

The tape is worth it every time you listen to it; as it seems like it never gets old.